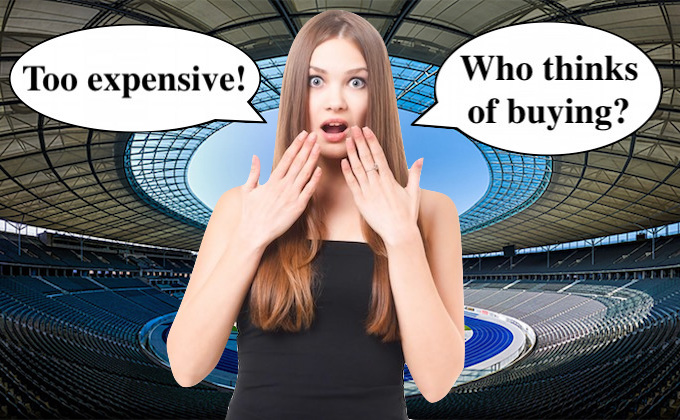 How much can you pay for the opening day ticket of Olympic Games? The announcement about the ticket prices officially reported the other day, has been controversial because of the silly maximum prices.

Is this historical competition for only posh people?

I understand that the host country have to collect enough money to compensate the expenditures at least, and make a big success as one of businesses. But setting high prices for the tickets could have a possibility of loosing fairness that anybody has a right to participate in and enjoy.

In my opinion, the host country should not expect much to collect a lot of money from the ticket sales. The first important thing for the host country is to attract overseas people as many as possible, and try to urge their consumptions with proper hospitality during the stays. Don’t you think that’s more efficient and visitors can spend a good time?

The new logo toward Tokyo 2020 Olympics suspected of plagiarism again

Anybody apparently has the same though after comparing with these logos. A few days ago, Tokyo Metropolitan Governm...

How many volunteers needed for Tokyo 2020 Olympics except you

By the time we realized, only 2 years left till Japan takes place the Olympics Games in Tokyo since 1964. Among some...

Why the 1940 Tokyo Olympics ended in phantom

As you guys know, Tokyo won a bid of the 2020 Olympics following the final competition with Madrid and Istanbul. Bu...

The impressive heat of Rio 2016 Olympics could turn out a trigger to lead some people to Japan in four years. Planni...
スポンサーリンク
What if apprentice Geisha played hard rock?
How to enjoy 2018 FIFA World Cup in Japan
Home
Tokyo 2020 Olympics

How vegans can live in Japan comfortably
What if Tokyo Olympics isn’t held in summer 2021
Why many Japanese leave ramen soup on purpose
3 crucial preparations to receive ¥100,000 as COVID-19 subsidy
How to apply for ¥100,000 on virus relief

Japanese guy who was born and grew up in Tokyo, likes European football, Alternative rock, iMac, and Sake

What Sakura flavor actually tastes like
What Shime means on Japanese meal
Japanese pretty girl, Saya, asks reality with 3DCG
What if Tokyo Olympics isn't held in summer 2021
How vegans can live in Japan comfortably