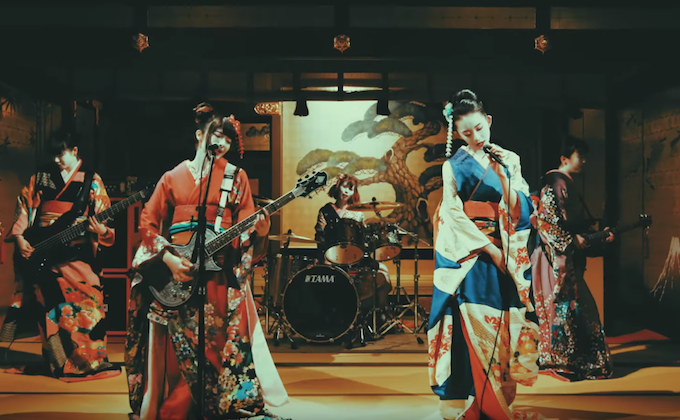 Do you know that there’s a long and harsh way to be a full-fledged Geisha? An apprentice Geisha called Maiko have to learn a lot of things from their youth onward like Japanese classical music, traditional dance, witty games, polite conversation and so on.

But I’ve never heard that they need to play even hard rock in a band while wearing Kimono. A music video launched by BAND-MAIKO formed all Maiko, has gone viral over the world as an unprecedented performance.

When hearing the word of BAND-MAIKO, most fans of BAND-MAID should have realized the pretty prank. BAND-MAID, a all girl rock band from Japan, combines a rock sound with a maid image modeled on Japanese maid cafes, and have already performed at many venues over the world. Anyway, let’s watch the hot video below.

Could you hear the high-pitched sounds by Shamisen which is a three-stringed traditional Japanese musical instrument? It seems to play an important role for the distinctive sound. Lastly, I want you to listen to the original song ‘secret My lips’ included their first full album ‘Jus bring it’ to compare. Which lips do you like better?

What Sakura flavor actually tastes like
Japanese pretty girl, Saya, asks reality with 3DCG
How Wagakki Band rocks with traditional Japanese musical instruments
The most handsome Samurai has another face
What Shime means on Japanese meal