The music could offer something new stimulus if you’re tied of typical J-pop sounds.
The sister duo, CHARAN-PO-RANTAN, genuinely started performing from 2009 when Koharu (accordion:R) found her real sister Momo (vocals:L) as a unique singer on the stateless sound.

The sound is like J-pop meets Chanson, Balkan, and Ska at the same time

To tell you their music easily, I carefully selected a covered song from their various songs called ‘Sudara Bushi’ which is a very popular tune by the 1960s Japanese comedy-jazz band Crazy Cats.
The classic song is remade well by their distinctive touch, and show us Japanese historical background around the 1970s.

The original outfits are largely Koharu’s design, done in collaboration with the duo’s mother, illustrator and designer Aki Matsunaga, who has made the band’s costumes since it began in 2009. 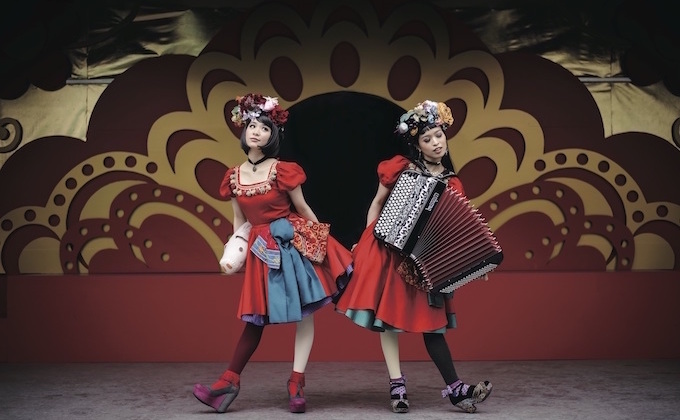 At last, I leave two remarkable topics here about them.
The one is that CHARAN-PO-RANTAN is the first Japanese followed by Jack Dorsey who is a co-founder and CEO of Twitter.
And the other is that Koharu has refused a request from David Gilmour in Pink Floyd on the grounds that only it sounds difficult.

Are you looking for an awesome Japanese anime in English with the subtitles? For native English speakers who really...

A Japanese girl who was called pretty genius has come back in 2 years with more skills and expressions. You might se...

How about their 9th new album LUV released in 4 years for you? Today, I’d like to answer an inquiry from a big fan o...
スポンサーリンク
The leading shrine, Ise Jingu, is the sanctum of Japanese god
The Japanese food, Onigiri, is a must in Asakusa, Tokyo
Home
Art & Culture